As expected Democratic Party leader Ilhan Omar requested POTUS ( President of the United States of America to warn India of the ongoing discriminatory acts against Indian Muslims just before 2+2 meeting scheduled  between Indian and American foreign and defense ministers which was attended by Defense Minister Rajnath Singh and External Affairs Minister Dr S Jaishankar from India part . It has become a custom to defame India by many US based so called Human Rights Activists and Neo -Liberal Organizations  They use to spewing venom, then a question arises ARE INDIAN MUSLIMS REALLY UNSAFE IN INDIA ?

Glancing at some events in the past days makes it clear that India is the only country in the world where the Muslim community is taking subsidiary advantage of being a minority, under the aegis of being harassed, and tormenting the majority Hindu population. On April 10, on the occasion of Ram Navami, several processions were being carried out throughout the country by devotees of Lord Ram. In 10 such places, when the procession was passing through Muslim abundant areas, it was met with stones, swords and bombs.

In fact, in Rajasthan, when the Nav-Samvatsara procession was being carried out there were gruesome attacks carried out in an assembled fashion. The attacks were organised pre-event. This can be proven by the fact that when the procession reached Hatwada bazaar, stones started being pelted in large numbers from the houses/rooftops nearby which injured dozens of devotees present in the procession.

Goons started attacking the devotees with various weapons, and shops and vehicles were torched. An investigation has found that trucks full of stones were procured in a large scale manner in the Muslim area before the Nav-Samvatsara procession. Furthermore, even petrol bombs were used for attacking the devotees.

The attacks were organised by a Congress councilman named Matbool Ahmed, who is yet to be arrested/detained. Whereas on April 13 when Rajasthan BJP chief Satish Poonia and BJP Yuva Morcha President Tejasvi Surya were going to meet the injured devotees, they were stopped by the police from going to Karoli on the orders of Rajasthan Chief Minister Ashok Gehlot. Far from providing justice, the Congress government in Rajasthan — for appeasement — is not even letting people apply salve on the injured.

On the day of Ram Navami, there were 10 such incidents of violence in Muslim-dominated areas. There were incidents of stone-pelting on devotees in Gujarat’s Himmatnagar and Khambat. Again several people were injured, shops were dismantled and vehicles burnt.

In Khargone, Madhya Pradesh, there were incidents of stone-pelting, violence and arson toward Ram devotees. When such an incident took place in Khargone, all seculars, including Congressmen, were hushed. But when illegal structures of these arsonists were demolished by Shivraj Singh Chauhan’s government, all such seculars started mourning.

In Lohardaga city of Jharkhand, when the Ram Navami parade was passing Sirohi village, they were attacked by people of the Muslim community, due to which a person lost his life and 12 were injured. Similarly, when such a procession was passing by a mosque in West Bengal’s Bankura, they were pelted by stones near Machan Tala.

In Goa’s Vasco city too such an incident took place where devotees were targeted, around 8:30 pm when the procession reached Islampura mosque where people were already stationed to disrupt and pelt stones at the procession passing by.

In Bihar’s Muzzafarpur when the Ram Navami processions were disrupted by goons, in an act of vengeance, a few devotees waved the saffron flag upon the mosque. While no one batted an eye at the disruption caused by the goons, the flag incident was made a national issue and Pakistan-operated social media handles spread various misinformation regarding this.

The hashtag ‘Muslim area’ is trending on Twitter. What is the implication of these attacks on Hindu processions in Muslim areas? Should there be anything like a Muslim area in India? Should Muslims calling themselves minority and receiving various subsidies behave in such a tyrannical manner? What is the reason Muslims hate the holy Ram Navami processions? Muslim area is not trending without reason on Twitter; behind it is a planned conspiracy.

Recently, there was a petition filed in the Madras High Court that there be restrictions on Hindu processions in Muslim areas and that keeping in mind the religious sentiments of Muslims there be a ban on Hindu temples in such areas. Perambalur (Tamil Nadu) district’s Kalathur is a Muslim-dominated area. The Muslim community here has been demanding restrictions on Hindu temples and processions since 2012.

With respect to these demands, the Muslims having termed Hindu festivals as ‘sin’, had filed the petition in the Madras High Court. After hearings the case, the two-member bench of Justice N Kirubakaran and Justice Velmurugan ruled it as intolerance of the Muslim community. The bench further stated that such intolerance is dangerous to the secular framework of the country.

The Madras High Court commented: “Just because one religious group dominates a particular area, the other community cannot be stopped from celebrating festivals or taking out processions on the streets of that area. Allowing religious intolerance is not good for a secular country. Any kind of intolerance by any religious group should be banned. Areas where sectarian festivals have been taking place for decades cannot be stopped in the name of inciting religious sentiments. The demand to ban the procession from the streets and roads cannot be accepted just because such area is Muslim dominated and that Hindu festivals cannot take place.”

The court argued that if the petition is accepted today, will the Muslims in the Hindu-majority country be able to celebrate their festivals peacefully in the coming days? Such protests will increase religious conflicts. Riots will erupt. Innocents will die and the country will suffer.

The sentiment, which is of the Muslim majority localities in Tamil Nadu, is the same as the 10 localities where Ram Navami processions were attacked. Can any other community put such conditions in a Muslim-majority country? Can any other denomination in a Christian country demand to stop the festivals of Christians? Is this not the culmination of the tolerance of Hindus?

Still, American MP Ilhan Omar feels that there is discrimination against Muslims in India. Here, instead of discrimination, appeasement has dominated in the past 7 decades. After 2014, when Hindu consciousness has awakened and Hindus are celebrating their major festivals with great enthusiasm, then the fanatical Muslim thinkers wearing the mask of secularism are becoming lean with unnecessary worry.

They are intent on defaming India at the national and international levels. The majority community of India is more tolerant than necessary and its tolerance has now become the cause of its infamy. 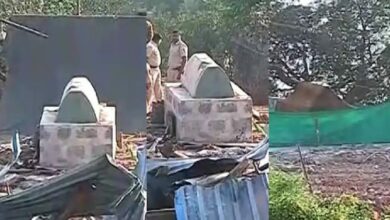